After a strong showdown at ESMO 2019, both GSK and AstraZeneca have reignited the fight of small molecule anti-cancer drugs against the industry’s brawny immunotherapy push. Leading this fight is poly(ADP-ribose) polymerase (PARP) inhibitor, one of the leading synthetic lethality targets.

These better than expected results at ESMO further validate the potential of synthetic lethality for the treatment of patients with specific cancer mutations. The results have acted as a confidence booster in a space where more than 70 drug candidates based on synlet gene pairs are being developed. More importantly, given that over 60% of companies working in this space are start-ups (established post-2010), the timing of these results couldn’t be any better.

The increasing hype is confirmed by the social media chatter that has been observed in the last few years. 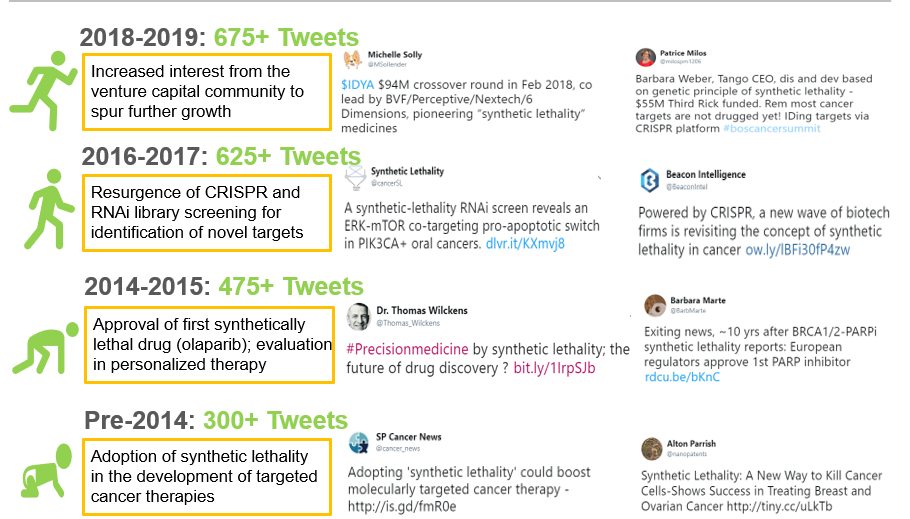 In interviews held with key stakeholders, the interest shown in the space is more than promising. Here are some of the key excerpts from KOLs interviewed by Roots Analysis:

“Some targets are under clinical evaluation while a significant number are in the preclinical / research. Driven by identification of novel and more efficient targets, there seems to be an immense opportunity for players engaged in this domain” – Chief Executive Officer, The Netherlands based Company

“I believe PARP inhibitors are doing really well in the market, having generated combined revenues worth USD 2-3 billion, since they were first approved. As research progresses and more such drugs advance to higher phases, companies involved in this field are likely to earn in billions.” – Vice President, Science Strategy, UK based Company

“We believe that synthetic lethality is a very promising area for targeted drug discovery and development. Moreover, the market potential is vast, as PARP inhibitors have already demonstrated benefits across several types of tumors. Wee1 based drugs are also likely to be approved in the coming years.” – Associate Director, Business Development, China based Company

“Synthetic lethality-based drugs have come up as promising alternatives for the treatment of a myriad of oncological indications. A prominent example of the aforementioned therapeutic approach, targeting synthetic lethal interactions, is the use of PARP inhibitors for the treatment of cancer patients with BRCA gene mutations.” – Chief Executive Officer, The Netherlands based Company

While the interest from stakeholders looks much better than before, what remains to be seen is who is going to lead this emerging space with the market opportunity of more than $8 billion by 2030.