Have you had your genome sequenced? If you asked this question a few years ago, people would have thought you were crazy. However, today, genetic tests are up for sale in supermarkets! Fifteen years ago, the first ever Human Genome Project was carried out, which took more than 13 years to complete. This (Human Genome
Read More

The rise in the popularity of cell and gene therapies has been widely talked about in recent years. The rise in this popularity has come with its own challenges, a number of which were identified in a recent report by Root Analysis. The challenges vary from the high cost of manufacturing to low capacity. In
Read More 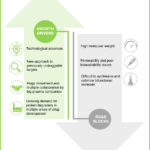