At the American Society of Hematology (ASH) annual meeting in Orlando, the team, led by the Abramson Cancer Center of the University of Pennsylvania, will discuss two multiple myeloma patients and one sarcoma patient who is participating in a trial, which is also supported by Tmunity Therapeutics (a company that recently raised $75 million in series B funding). The patients were treated with a CRISPR therapy.

According to an abstract of the study released Wednesday, the CRISPR treatment was well tolerated. The gene-edited cells the patients received expanded and traveled to the tumors they were meant to treat. And the three patients, all of whom had failed previous treatments, are still alive nine months following their cell infusions, though it’s too early to assess their overall response.

Check out the coverage in the news article here.

How is the genome editing market landscape evolving: Currently, there is an evident increase in demand for complex biological therapies (including regenerative medicine products), which has created an urgent need for robust genome editing techniques. The biopharmaceutical pipeline includes close to 500 gene therapies, several of which are being developed based on CRISPR technology.  Recently, in July 2019, a first in vivo clinical trial for a CRISPR-based therapy was initiated.

Where are the CRISPR-based genome editing service providers located: Most of the experienced stakeholders in this domain are presently based in the developed geographies; the opportunity in these regions is expected to be relatively higher as compared to other regions. 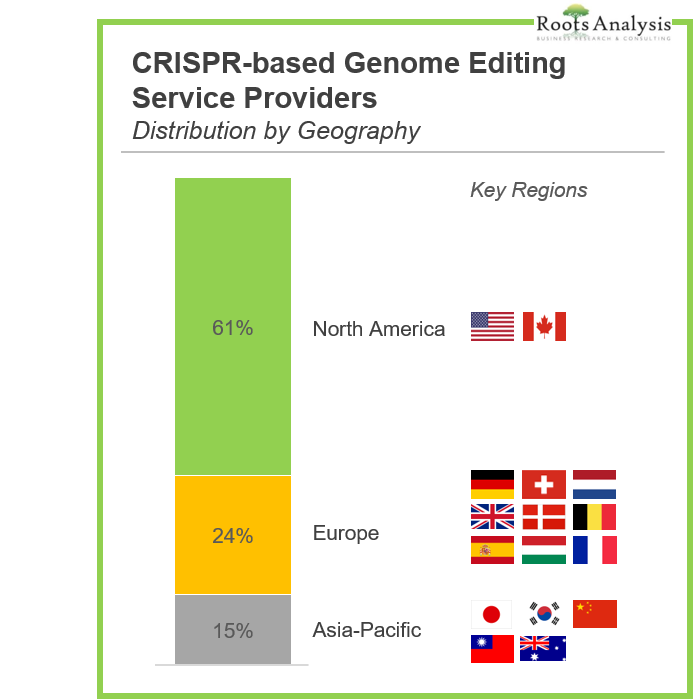 To get more insights about the market, check out the detailed report here.